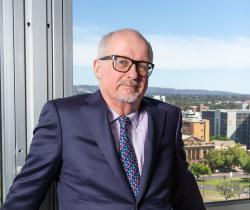 The Economic Society of Australia (South Australia) invites you to an evening event with special guest speaker, Dr Matthew Butlin from the South Australian Productivity Commission. The topic of his presentation is

Dr. Matthew Butlin is the Chair and Chief Executive of the South Australian Productivity Commission. This is a part-time appointment.

Dr Butlin previously held the role of Red Tape Commissioner in Victoria from September 2015 to June 2018. He was Chairman of the Victorian Competition and Efficiency Commission (VCEC) from 2008 to 2015, a body that performed a similar role to the SAPC, and a Commissioner with the Commonwealth Productivity Commission in 2007 and 2008. He has held various senior executive roles in the Australian Public Service, and in the mining and management consulting industries.

Dr Butlin is also a part-time Senior Associate of ACIL Allen Consulting. There are strict protocols in place with the South Australian Government to avoid any conflicts of interest between this role and his concurrent role as the Chair of the SAPC.

In addition, he is currently the national President of the Economic Society of Australia and an honorary Enterprise Professor at Melbourne University’s Melbourne Institute of Applied Economic and Social Research. He is a former honorary Professorial Fellow at the Monash Business School.

Dr Butlin holds qualifications from the Massachusetts Institute of Technology and the Australian National University.

Register now as seats are limited!

Attendance is free for current members of the Economic Society of Australia and Women in Economics (WEN).  Tickets for non-members are $20. Membership is available at the event.

Sign up to Economic Society of Australia to enjoy benefits and upcoming events in 2019.

This event is proudly sposored by KPMG.