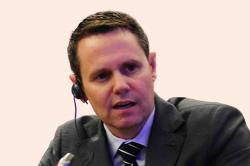 Economics Society of Australia (South Australia)'s event for 2022 with be an end of year celebration, including our AGM and a talk by our special guest speaker Simon Lacey. Mr Lacey is currently Senior Lecturer in International Trade at the University of Adelaide’s School of Economics and Public Policy.

The AGM will be followed by:

by Simon Lacey on "Decoupling and Deglobalization : Rhetoric and Reality"

Calls for decoupling between China and “the West” started to be made from certain quarters towards the end of the Obama administration but became much more vocal and mainstream during the presidency of Donald Trump. Initially dismissed by many observers as sheer fantasy, today we increasingly live in a world where the prospect of extensive decoupling is a much more likely outcome than many would have ever predicted – but not for the reasons one might have originally imagined.

Simon Lacey is currently Senior Lecturer in International Trade at the University of Adelaide’s School of Economics and Public Policy. Prior to that, Simon served as Vice-President Trade Facilitation and Market Access at Huawei Technologies in Shenzhen, where he was responsible for monitoring, managing and mitigating the biggest trade and investment risks facing the company across a dozen of its most important markets internationally.

Simon has worked in government advisory and policy advocacy roles in more than 30 countries supporting both sovereigns and corporates. It was in this capacity that Simon spent four years in Jakarta advising the Indonesian government on a broad range of issues in connection with the country’s membership of ASEAN, the WTO, and various preferential trade agreements and bilateral investment treaties.

Simon obtained his bachelor’s in laws from the University of Fribourg (Switzerland), and an LLM from the Georgetown University Law Center in Washington DC. He is currently completing a PhD in international economic law at UNSW Law.